BOOK REVIEW - The Queen of Nothing by Holly Black


My gosh it has been a long wait for this one! Originally due to be published next year, but thankfully brought forward, The Queen of Nothing by Holly Black is the thrilling conclusion to her 'The Folk of the Air' series. *WARNING! IF YOU HAVEN'T READ THE FIRST TWO BOOKS THEN THIS POST CONTAINS SPOILERS!*.


Jude has been exiled to the mortal world mere hours after marrying The High King, Cardan, and becoming The Queen of Faerie. Struggling to come to terms with her sentence, and Cardan's betrayal, she vows to reclaim everything she lost and enact revenge on those who wronged her...  Opportunity presents itself in the form of her twin, Taryn, whose life is in danger and desperately needs Jude's help. Braving to return to Faeire, upon pain of death, Jude finds her kingdom on the brink of war and must do everything she can to stop it, including confronting Cardan...


Oh, how I devoured this book! I loved everything from beginning to end! Everything I have been waiting two years for finally came about and I don't think Black could have written a better conclusion if she'd tried. My heart was full to bursting by the time I read the last sentence!


As always Black's writing was effortless. She conveys the surreal, ethereal quality of Faerie in a way that heightens not only your imagination but your senses too, something only this "Faerie Queen" can!


Everyone's character arc comes full circle and I was stunned at a few character’s fates... Black sure knows how to throw a plot twist in doesn’t she!


For me the two who developed most were Taryn and Cardan. Taryn has grown from the trivial, frivolous girl into a strong independent women “who don’t need no Locke”… She was one of my favourites by the end. And of course, I'm still hopelessly in love with Cardan! His character development was unsurpassed. Watching him grow throughout the series from the nasty, spiteful boy we meet in TCP to the scheming, methodical young man we say goodbye to in TQoN. It was refreshing to see a different side to our Wicked King.


If I had to choose, TWK would be my favourite out of the trilogy. Although I loved TQoN, it felt lacklustre in comparison to the previous book. Maybe I was expecting too much… It’s still a dazzling read nonetheless that will hold an eternal place on my bookshelf. 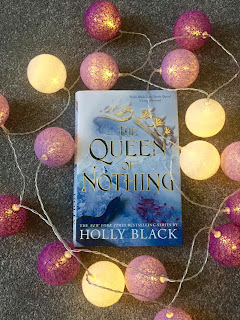 Email ThisBlogThis!Share to TwitterShare to FacebookShare to Pinterest
Labels: Books, Fantasy, Holly Black, Reviews, The Queen of Nothing, YA