BOOK REVIEW - The Invasion of the Tearling by Erika Johansen

I bought this book at the same time as I bought The Queen of the Tearling when I was on holiday in Cornwall and delved straight into it as soon as I finished the first one!

The book begins as a continuation from where The Queen of the Tearling left off making it very easy to keep up with and know what was going on.

The main story line is still set in a futuristic medieval world where humanity has tried to start again, however intertwined within the main plot is a sub story line conveyed through a series of flash backs. At first these flash back chapters seem like a separate story that is linked to the main but as the book goes on you soon realise that this sub story line is actually very important and holds vital clues in understand the main story line making the book much more interesting and keeps you reading.

The book is still written in the third person narrative, same as The Queen of the Tearling, which again gives the reader an omniscient perspective. This style of writing really works for this series as there is a lot going on and many chapters focusing on different characters and set in different settings, that it is a lot easier to keep up and understand exactly what is going on at each point as you feel like you are witnessing it all first hand yourself rather than from one side.

Similarly with The Queen of the Tearling, Johansen's choice of language and vivid description continues in this book. Some readers might find some scenes in the book disturbing and it certainly isn't for the faint hearted, but for me this gives more characterisation and depth to the characters allowing us as the reader to see the unmasked them as well as understand just how brutal this world is. I applaud Johansen for taking a risk and being controversial as it is refreshing to read.

The Invasion of the Tearling is the perfect sequel, answering some questions from the previous book and creating new ones for the next. I love this series and would recommend it to anyone! 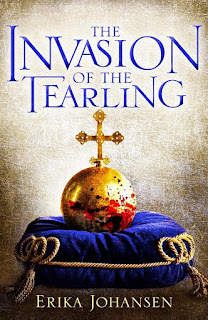 Email ThisBlogThis!Share to TwitterShare to FacebookShare to Pinterest
Labels: Books, Erika Johansen, Reviews, The Invasion of the Tearling